Turkmenistan is located in the south of Central Asia. In the west the country borders on the Caspian Sea. The northern neighboring countries are Kazakhstan and Uzbekistan, with the Amu-Darja forming the border river to the latter. In the south the country borders on Iran, here the ridges of the young and seismically active Kopet Dag Mountains form the borders. Turkmenistan shares the southeast border with Afghanistan. With a maximum east-west extension of 1,300 km and a maximum north-south extension of 540 km, the area of ​​Turkmenistan is around 490,000 km². As a bridging country between the states of the former Soviet Union in the north, the states of the Caucasus in the west and those of the Middle East in the south, Turkmenistan has a potentially important transit function, which, however, can only be implemented to a limited extent at present.

Deserts and semi-deserts: 90-95% of the country’s area

Due to the very low humidity, a daily temperature difference of over 30 °Can be reached in summer (under 10 °C at night and over 40 °C during the day). With an annual average of around 28 to 34 °C, temperatures of up to 70 °C are reached directly above the ground. In terms of surface temperature and average maximum values, the Karakum is one of the hottest deserts in the world. To the north is the Karakum through the Amu-Darja bounded in the east by the foothills of the Hindu Kush, in the south by the Kopet Dag Mountains and in the west by the Caspian Sea. Rainfall falls, if at all, from December to April. Outside of the irrigation oases in the north and east, the desert is hardly populated (the population density of about 0.15 people per square kilometer or 0.00071% of the population density reached in Germany). Only a few oasis villages reach more than 200 residents.

The foothills form a favorable area due to the relatively high amounts of precipitation compared to the rest of Turkmenistan in combination with the relatively fertile pediment areas. Some of the largest cities in the country can be found here and the region is also characterized by a high population density outside the major centers.

The west of the Kopet Dag Mountains reach up to the level of Balkanabad, but here only protrude a few hundred meters from the mighty pediment. Even further to the west the mountains sink into it. In an easterly direction, the mountains gain in height and reach their highest height at Ashgabat at almost 3,000m. Due to an advance of the Iranian border, the mountain ridge lies even further east within Iran. The foothills of the Hindu Kush in the extreme southeast of the country hardly reach heights of more than 750m and only in a few places do the mountains rise above 1000m. The slopes are flat here, corresponding to the wide pediment areas. Apart from a few deeply cut valleys southwest of the capital, the mountain region is uninhabited. Few villages have more than 500 residents.

Most of the once dense network of weather stations have now been abandoned, so that current weather reports and reliable climate diagrams are only available from a few locations.

According to Petwithsupplies.com, Turkmenistan has the fourth largest gas reserves in the world and with the South Jolotan gas field one of the largest contiguous gas fields in the world. Most of the development took place during the 1970’s and early 1980’s. Since 1991 only a few investments have been made in new exploration and extraction techniques. The transport infrastructure is also in need of renovation. Chinese companies have established themselves as the largest donors in this regard in recent years, while European companies have so far mainly been awarded concessions in the technically more demanding offshore sector.

Although Turkmenistan has also on deposits among others Sulfur, potassium, magnesium, limestone, gypsum, cement and basalt. However, the individual sites are relatively small, so that Turkmenistan does not play a significant role here on the world market. A comparison with the other states of the former Soviet Union shows that the Turkmen deposits were not considered to be of greater relevance. All raw material deposits are in state hands.

With the exception of the natural gas and oil deposits, the Turkmen raw material deposits have not yet been systematically developed. The only known exception are two cement factories in the south of the country. The export share of the sum of all non-petrochemical raw material products is less than 1.5% of total Turkmen exports. 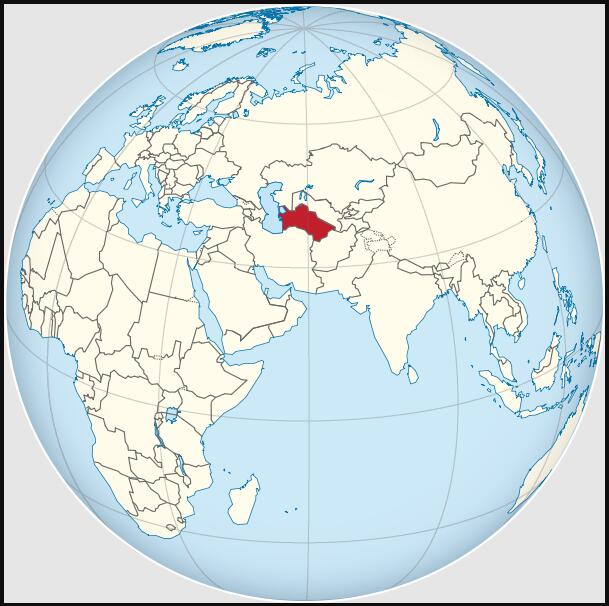