FLIGHTS, ACCOMMODATION AND MOVEMENT IN POZNAN

A trip from Finland to Poznan

There are no direct flights from Finland to Poznan, but the Polish airline LOT offers a daily connection to Poznan from Warsaw. Exchange flights can be obtained quite cheaply, for about one hundred euros one way. A combination of separate flights can also work, as LOT often sells domestic flights in Poland at a special price.

A practical way to travel to Poznan is by train. The city is a train hub to Berlin and halfway between Warsaw. From both metropolises, the city can be reached by train several times a day. The journey takes about three hours. There is also a direct train connection from Gdansk. An internal Polish train ticket costs about 10-30 euros, depending on the type of train.

Accommodation in Poznan is quite comprehensive, from hostels to five-star hotels. Many of the accommodations are fairly new, and most of the offerings are from mid-range hotels. Usually, the accommodation is located either in the city center or in its immediate vicinity.

The city’s comprehensive tram network works well, and ticket machines can be used in English. In particular, it should be noted that drivers do not sell tickets in Poznan. 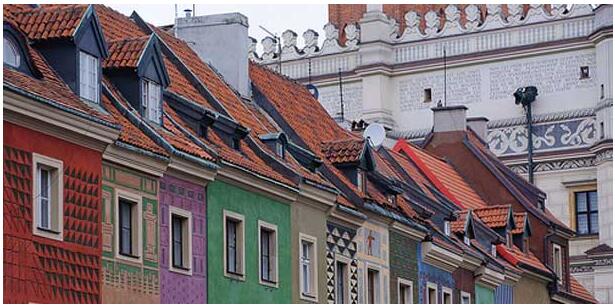 The historical sights of Poznań are largely located in the area of ​​the smaller Old Town. Historic Poznan has two hearts: the Old Town Square Stary Rynek and the Cathedral Island Ostrów Tomski, located a few kilometers from the square.

The center is also dominated by German architecture, home to many important sights, such as the university and the castle built in the early 20th century for the visit of the German emperor. The main attractions of the city center are explored on foot during the day.

The two-tower cathedral on the Cathedral Island is the oldest in Poland. The building was originally completed as early as the 9th century, but the layout has been modified several times. The current, Gothic façade dates from a post-war repair.

The cathedral is at its best in the evening, when the east side of the island offers a stunning view towards the spectacularly lit church building.

Poznan’s most famous landmark, the Town Hall Ratusz is the heart of the Old Town. The building dominates the Old Town Square, which represents the Italian Renaissance style from the 16th century and is one of the most beautiful in northern Central Europe.

Every day at 12 noon, a group of tourists gather in front of the town hall to watch a special tradition: two mechanical goats step out of the front wall, accompanied by a trumpet, knocking their heads together several times.

Traces of the war in Poznan

The Germans built one of the largest fortification systems in Europe in Poznan in the 19th century. During World War II, the forts were largely destroyed, but here and there are restored parts of the fortress left.

The main remains of the fortress are Fort VII, which served as the Gestapo prison and concentration camp, and Cytadela Park, where the strongest part of the German fortress was located. Today, Cytadela has a war museum, monuments to Soviet soldiers, and military cemeteries, among others. Fort VII, on the other hand, serves as a concentration camp museum.

Relax and shop in Poznan

As a major student city, Poznan’s nightlife is lively. The numerous clubs and bars in the Old Town area are filled with banquets in the evenings. Especially on Wrocławska Street, there is plenty of choice from cheap shot bars to elegant clubs.

Nightclubs are worth a visit because Polish young people are uninhibited and skilled dancers. Even if you don’t dare go along yourself, following it can be an experience.

A must-see in the city’s numerous shopping malls is the Old Brewery in the city center, Stary Browar, housed on the premises of a former brewery and offering a special setting for shopping. In 2005, the center was voted the best medium-sized shopping center in the world. Shoes and clothes are often cheap for Finns.

Beer lovers will be attracted by a visit to the Lech Brewery on the east side of the city. An English-language tour can be booked for a small group, there is no minimum. The tour lasts about two hours, and finally we taste the beers.